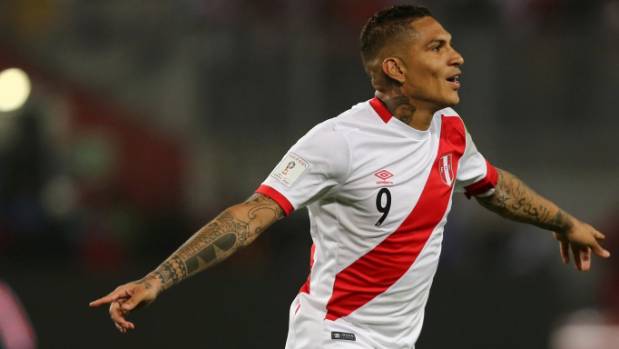 Peru striker Paolo Guerrero celebrates after scoring from a free-kick against Colombia.

The best number 9 in the world is …… Peruvian?!

The name Paolo Guerrero will be unfamiliar to New Zealand football fans but is likely to be very well known once the FIFA World Cup 2018 Intercontinental Playoff is complete.

Guerrero, the Peruvian captain, and all time top goal scorer for Peru, is very much the main man for the All Whites’ opponents.  Playing as striker, his career has been largely based in South America (he currently plays for Flamengo of Brazil) – perhaps the reason for his lack of profile in this part of the world.

Anyone doubting his ability would do well to consider the words of South America football analysts after Peru drew 2-2 with Argentina in the early rounds of COMNEBOL qualifying.

“Paolo Guerrero is a beast,” said Sebastián Vignolo, who hosts 90 Minutos for Fox Sports in Argentina. “And if he were Brazilian, Argentinian or Uruguayan, he’d be playing for Barcelona.”

“Guerrero is one of the best No 9s in the world,” said the Chilean analyst Rodrigo Sepúlveda. “There is no difference between him and Luis Suarez or [Robert] Lewandowski.”[1]

A mixture of technical brilliance and athletic power have made Guerrero one of the most feared strikers in the tough CONMEBOL qualifying schedule.  He scored six goals and linked closely with attacking midfielders Edson Flores and Cristian Cueva who scored another nine between them.

The All Whites may be pinning their hopes on the power of Chris Wood to bully the Peruvian defenders.

However, if the views of South American football pundits are anything to go by, it will be the Kiwi defenders who could be in for a combination of a physical battering and technical masterclass.