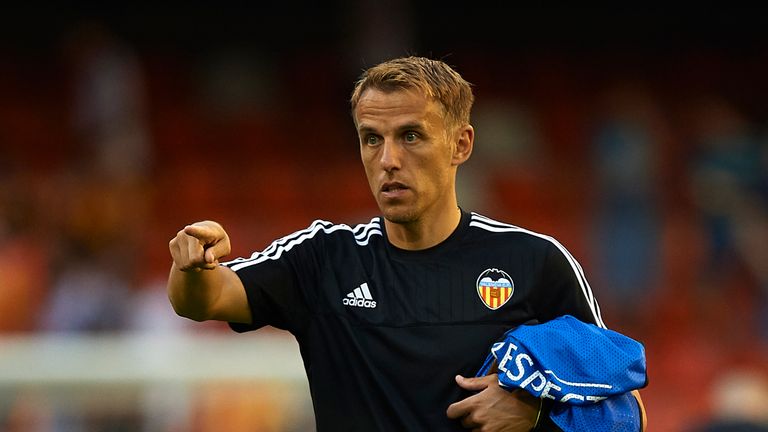 Lessons From Spain
Moving to Spain to become an assistant coach of Valencia, after playing over 500 Premier League matches for Manchester United and Everton, was about getting out of the comfort zone for Phil Neville.

Learn a new language, join a new club, and start at the ground level.

There must have been times when Neville wondered if he had done the right thing.

The Importance of Challenge
But speaking on the Big Interview with Graham Hunter podcast it is clear that being open to new experiences is one of the attributes that set him up for success during his playing days.

He has lived this philosophy since being a teenager.  A prodigiously talented young cricketer, Neville was playing senior cricket at the age of 11 in the tough semi-pro leagues of Lancashire.

Facing West Indian Otis Gibson (659 1st class wickets and one of Wisden’s Five Cricketers of the Year 2008) as a boy is proof of his attitude to take on any challenge.

Neville’s view is that it is no different for young players today.

After witnessing the challenges of the Spanish club’s youth players Neville believes many young footballers have it too easy.

Some of the young Valencia players were taking a two hour bus ride three times a week just to get to training before getting on a return bus and arriving home around 11pm.

Tough as it may be, this desire just to turn up built resilience and mental toughness in the Valencia age group programme.

Despite leaving the club in mid-2016, Neville was so impressed with the Spanish youth coaching model that his promising son Harvey subsequently signed an extended contract with Valencia.

Players come out of the programme determined and driven to be the best that they can be.  These characteristics set the platform for a future in the game at the highest level.

Not a Minute Wasted
The second big difference he noticed compared to the English development system was the role of the coach.

“They don’t waste a minute of a session to teach, to learn, to coach.”

Coaches were constantly talking to the players – correcting the little things like body position and angles.  Much more detail was shared with the players and the coaching style was directive.

Teachers are there to guide footballers every step of the way.

We don’t expect students at school to learn geometry or physics simply by going to a lesson.  It is the role of the teacher in the classroom and the coach on the pitch to show a young person what they need to know.

By not doing this, the coach is abdicating responsibility and dumping it squarely on the young player.

Neville learnt that just “letting the game be the teacher” is a fallacy.

In Spain the role of the coach is to make sure that players learn.

Coaches took the lead in developing a long-term plan for the player.  The philosophy was that they were coaching a young player in the early part of their playing career.

When coupled with the challenges that many of the young footballers have just to get to training it is no surprise that Spanish youth football is a production line of talent.