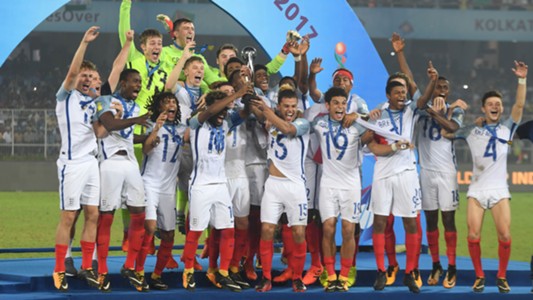 At the start of the year you would have been given long odds on England winning both the men’s U-20 and U-17 World Cups.  But, with a 5-2 thumping of Spain in the U-17 final in Kolkata, India, that is exactly what England have achieved.

The failure of the English men’s national team to win a major tournament since the 1966 World Cup linked with the consistent defeats on penalties, and the more recent defeat to Iceland at Euro 2016 have resulted in England being something of a slow moving train wreck at international level.

The success in 2017 at age group suggests that this may be about change.

Like Iceland, who we discussed in our recent blog, England have invested in youth development and taken a long-term view to improvement.

So what has been the English approach?

Firstly, the opening of a national training centre, St Georges Park, in October 2012 has given the Football Association a venue to bring the best young players together where they receive excellent coaching at a state of the art facility.

Secondly, the English coaches are aligned in respect to how they coach at age group level across both genders.

The English model is designed to produce players that are comfortable on the ball, can beat the opponent, and have good passing ability.  The philosophy of the national training centre is to produce teams that are focused on attack.

This is quite a change from the traditional focus purely on physical strength that has dominated the English game for so long.  England has found a balance of technique and athleticism.

Finally, the national training centre personnel work closely with clubs across England.  This collaboration is an improvement on the previous animosity that existed at youth level between clubs and the national body.  This also helps to ensure that coaching is consistent across the country and the player is the focus.  Players also have the benefit of being able to access impressive training facilities in their club environments.

The big question for England football is whether this unprecedented success at youth level translates to the senior level.

For inspiration on how youth success can propel a nation forward England might want to have a look at the history of Spain.  After winning the U-20 World Cup in Nigeria back in 1999 an Olympic silver medal followed in Sydney.  By 2008 Spain were the European Champions before winning the FIFA World Cup in 2010, and then the Euros again in 2012.

Looking back at that 1999 team goalkeeper Iker Casillas went onto play 725 matches for Real Madrid and enjoyed a decade in the Spanish national team.  Xavi was the same – over 700 appearances for Barcelona and a mainstay of the midfield of that dominant Spanish national team.  Many other players enjoyed long professional careers or represented Spain.

For the English age group players that have done so well this year to make their mark at senior level they will need ongoing high quality coaching to improve and the playing opportunities to test themselves.

In this regard the player of the tournament in India, Phil Foden, is well placed to catapult forward.   Based at Manchester City, Foden was involved in the senior team’s pre-season tour to the US and is under the tutelage of Pep Guardiola.

Guardiola understands the value of youth development and has a high regard for Foden.  Likewise, Rhian Brewster (Liverpool), the top goal scorer of the tournament, has been involved in the Liverpool first team squad under Jurgen Klopp.

Both of these clubs will be required to think carefully about how they integrate youth into their matchday squads or whether loan opportunities in development environments will best allow Foden and Brewster to be the best that they can be.

The gulf between age group and elite senior football is vast but with the right support and guidance of these players we can hope to see a more attacking, fluent England national team in the years ahead.

One player who has already made the jump is Jadon Sancho.

After scoring three times in India for England he was called back to his club Borussia Dortmund and came on as a substitute in the 2-2 draw against Eintracht Frankfurt.